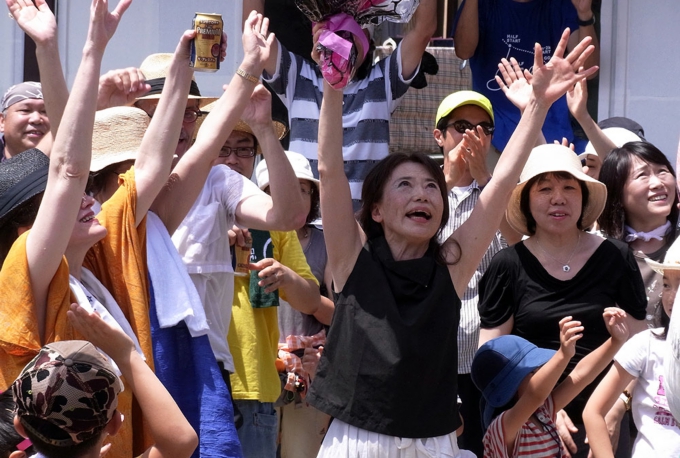 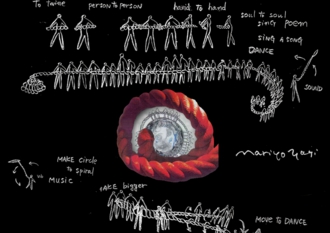 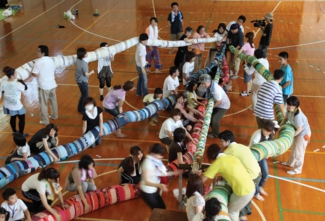 1992.4
JAPAN AND BRAZIL Students of Hieidaira Elementary School in Japan made Nawa-rope with their worn-out T-shirts. They also produced drawings and poems about life. These drawings were later shared with Brazilian children living in a poor area, who also made drawings and produced Nawa-rope out of their old, ragged T-shirts. Mariyo Yagi made a monumental two-part Nawa-rope sculpture, entitled "DNA of Culture Brazil and Japan", using the T-shirt Nawa-rope produced by the children as part of the sculpture. One-half of the sculpture is now in the Brasilia Museum of Modern Art Permanent Collection, and the other part remains in the artist's collection.

1992.5
RI O DIJANERO and BRASILIA, BRAZIL MariyoYagi presented her philosophy " Nawalogy" in Brasilia at the "Environment and Survival" Conference and Exhibition, part of the Omame Project, which involved 100 artists from all over the world. Her participation was funded by the Japan Foundation. At the Rio Earth Summit, 100 international artists joined together to perform Nawa-link spiraling dancing and singing, and to create wind-sounds by swirling the Nawa-rope with wood in large cirlces through the air. "Nawalogy" and its philosophy of interconnection of humans with nature and civilization was an important influence on the conference and its attendees.


1995.11
KOBE ROOTS, JAPAN 500 Kobe citizens who suffered from the Great Hanshin earthquake collaborated to create a huge Nawa-rope column made of 10,000 old T-shirts. "The shirts formed a human body or a human soul," the artist explained. Each shirt was inscribed with a message of encouragement, sent from all over Japan, to help re-vivify the earthquake survivors. This Nawa column, titled "Kobe Roots,"( 8m high X 1m diameter) was erected by the earthquake survivors as a unifying symbol at Yuzuruha Shrine in Kobe. "Kobe Roots" was born from the collective strength of communities.

1996.1
KOBE ROOTS NAWA art ceremony, JAPAN Mariyo Yagi orchestrated a ritual burning of "Kobe Roots" as a form of Requiem to console the souls of those who died in the earthquake. Many earthquake survivors said that this burning ritual helped them to be at peace with those who perished, to accept their own survival without guilt, and to acknowledge the importance of their bondedness to one another. Out of the ashes of the burnt Nawa-column, Mariyo Yagi produced works of art as a physical symbol of the human connection that remains after a transformative event.

1996.6
NAWA LINK IN QUARRATA , ITALY Students of Pistoia High School, Italy, collaborated to create Nawa-rope made with recycled textile materials from the local industry. Mariyo Yagi was invited for the 2nd Quarrata Biennnale and created a Nawa installation in the plaza of Quarrata city. 50 Quarrata citizens performed a dance of intertwining their old T-shirts into Nawa-rope.

1998.4-11
ECO-LINK KORYO, SHIMANE, JAPAN The town of Koryo-cho, Shimane, Japan invited Mariyo Yagi to help them construct a Nawa-column made with 10,000 worn T-shirts entitled "ECO-LINK KORYO". "Nawa is a symbol of connectedness between nature and human life," said Mariyo Yagi, and the project with the people of Koryo-cho emphasized preservation of the environment, recycling, and the preciousness of nature.

1999.4-8
UNIFICATIN THROUGH MYTHOLOGY, JAPAN The Chamber of Commerce of Yonago-Totori region invited Mariyo Yagi to help them unify the 12 cities of their area. Historically, these cities were part of the same unified community, and the more recent governmental divisions into individual cities had created an environment of competitiveness among neighbors. Together with Mariyo Yagi's guidance, the people of the 12 cities joined together to create a Nawa-column made of 25,000 worn T-shirts. Entitled "Kunibiki", (10m high x 2m diameter), named after a story from the ancient Izumo mythology which they shared,"Kunibiki" became a contemporary symbol of their community bonds, past and present.

2000.7-12
NAWA-VITAL LINK 2000, KYOTO, JAPAN The project Nawa Vital Link 2000 Kyoto brought together 10,000 people to collaboratively produce a Nawa column (11m x 1,2m diameter) called "The 21st Century-The New Earth Axis". The Nawa column was made with 10,000 worn T-shirts inscribed with individual messages for the 21st Century. The Nawa column was erected in Kyoto City Hall Plaza. Using only sunlight and a magnifying glass, fire was created and used to ignite a ritual burning of the entire column. "Because Kyoto has the most traditional culture and is the most conservative city in Japan, I wanted to create a new stream of fresh air through this project to revitalize Kyoto." Mariyo Yagi was able to collaborate with the Kyoto Fire Brigade, who gave a special exception to allow the burning ritual, and became a part of the performance as they stood by in their red fire trucks spraying a mist of water while the fire ritual was performed.